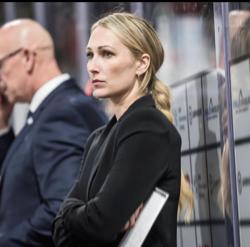 The Windy City Storm (WCS) is proud to announce that our very own Jessica Campbell, President of Girls Hockey will be alongside the German National Team (Deutscher Eishockey-Bund) at the 2022 IIHF Men’s World Championships. The tournament is scheduled to take place from May 13th until May 29th, located in Tampere and Helsinki, Finland. While there, Jessica will be serving as an Assistant Coach for the German National Team. Additionally, she will have the opportunity to be alongside Assistant Coaches Tom Rowe (Nürnberg Ice Tigers) and Cory Murphy (HIFK) while all collectively working with German National Team Head Coach Toni Söderholm.

Jessica will be the first ever female behind the bench at the IIHF Men’s World Championships, making this substantial accomplishment one worth emphasizing. She has been in attendance for the German National Team since April 25th and will be coming back to return to our WCS staff May 30th once the tournament has concluded. The WCS couldn’t be more excited for the opportunity that Jess has in front of her and the type of history she is making while at the World Championships. “Jessica is the first ever woman to be on the coaching staff of a men’s team at the IIHF World Championships. We at WCS knew how special Jessica was, since her first day on the job. Now the entire world knows. -WCS U14 Head Coach Frank Bisceglie”. The world stage is one not many get to experience, the Windy City Storm is grateful to have someone as knowledgeable as Jess to be part of our club and aid in our player development even more following her return from Finland.

The WCS is ecstatic for Jessica, the opportunity this experience presents not only for women but additionally, a display of a bright future ahead for young girls involved in the game of hockey, including our very own that look up to her. “I am excited to be part of the German National Team and to have the opportunity to work alongside this caliber of staff and players competing on the world stage. I am excited to lead the PK as Germany has always been a defensive power house and to bring a new perspective to our offensive strategies through the event. I feel nothing but respect and gratitude for the DEB Federation and hope my role with the team will inspire more opportunities for women coaching in the game with similar aspirations at the highest level. -Jessica Campbell”

Prior to Jessica and the German National Team departing for Finland on May 10th, she was part of the German National Team’s training camp process located in Dresden and Schwenningen, Germany. A significant task such as the training camp process included leading player development skates for the Germany National Team, as well as helping to finalize the selected roster that will have the opportunity to represent Germany at the IIHF event. Notable players that have been names to the German roster include NHL’s own Tim Stützle, Ottawa Senators, Philip Grubauer, Seattle Kraken and Moritz Seider of the Detroit Redwings. This powerhouse trio will push Team Germany deeper into the tournament in seeking for championship success.

Jessica’s passion to set new standards, break barriers and her commitment to setting a positive example for females in the game of hockey is an achievement our entire Windy City Storm family is grateful to be associated with. Campbell mentions, “I am proud to represent Windy City Storm, lending me to this opportunity to coach professionally at IIHF Worlds, and dedicating this experience to our girls that inspire me every day to keep striving for more. The meaningful support coming from Chicago makes me very eager to return home at the end of the event to enter our next phase of CYA becoming the Storm. I am confident my experience here will strengthen us as a club in our daily pursuit of excellence in the very exciting months ahead.”

While making her mark with the German National Team, Campbell’s knowledge of the game, elite level of playing experience and significant leadership is going to be put into action on one of hockey’s biggest stages.  On behalf of the entire Board of Directors, “We are proud of Jessica and excited for her opportunity to coach for the German National Team in the World Championships.  Our program exists to open the door for opportunities like this. Jessica has proven the value she brings to any coaching staff and we wish her the best in the IIHF World Championships. – Mark Jalcovik WCS President”.

Team Germany will kick off their first game of the IIHF Men’s World Championships against Jessica’s home country of Canada. The game will take place on Friday, May 13th at 7:20pm CEST (Central European Standard Time) puck drop at 12:20pm CST in Chicago as the game will be aired on NHL Network.

While competing against Canada, Jessica will have the unique opportunity to coach against elite NHL players such as Mathew Barzal of the New York Islanders and Damon Severson of the New Jersey Devils. Prior to the World Championships, Campbell had the chance to train both Barzal and Severson on the ice. Being the first female to stand behind the bench at the Men’s World Championships is an accomplishment within itself, for Campbell to also be kicking off the tournament against her home country will make the memory and experience all the more special for her.

Best of luck Jessica, the entire WCS organization is proud to have you as part of our family.